If you got a pay rise after Christmas then count yourself lucky; Figures released by Statistics New Zealand this week show that average hourly earnings over the last few months have remained stubbornly static. 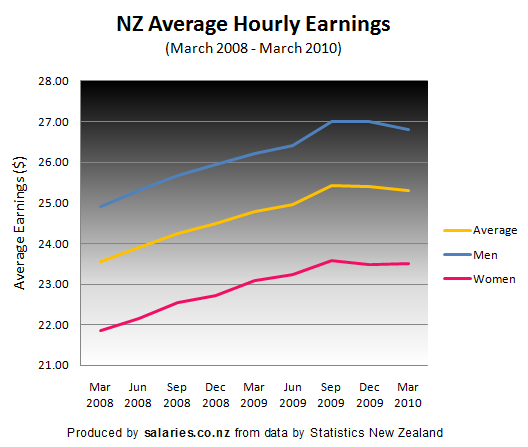 According to the Quarterly Employment Survey (QES), average weekly earnings in New Zealand were $959.13 as of March 2010. This is composed of average earnings of $1050.53 for men and $857.73 for women. These numbers reflect the total average earnings, i.e. wage or salary plus overtime pay and benefits.

I am on a measly $17 an hour and have had to fight for that. Working really hard on a trade shop counter, having to help people with technical questions. We get a little staff training, but not enough, sort of thrown in at the deep end! I do enjoy my job but think I am well underpaid. The owner wants to sell the business after 30 yrs so he isn't going to care much about how badly a lot of us are paid.

I dont see how they figure that the average wage in NZ is that much a week, I live in Rotorua and id be highly suprised if 90% of people in this town were even getting $600 a week, Im on 18 an hour and i only just get 600 and i know alot of people that earn alot less than I do, the people that write these crack pot figures need to pull there heads in and actually have a look at what is really going on

Thanks for your comment Brad. It's true that the average national wage doesn't necessarily represent a "typical" wage, but it is still useful in terms of getting an idea of how it trends over time, and how it compares to other countries.

"Average" wage figures can be skewed by higher earners, though also bear in mind that the cost of living varies a lot throughout the country. I.e. the average Auckland or Wellington wage is not the same as the average Rotorua wage, and neither are the costs of living.

Also, the figures above include overtime pay, benefits and compensation for annual leave, and they are gross (before tax) figures meaning that the average cash-in-hand per hour would be different.

I would like to see the average wage expressed in an annual figure less what the average tax paid.
Also I imaginee the survey is at best a land line telephone survey which means not many young under 20's would be surveyed as they more often than not use mobile phones.
I would also like to know what the demographic of the survey was.

I bet not many people from Rotorua as one respondent suggests ot Te Aroha or say Mataura in the South Islan were surveyed.
The recent survey covering Auckland remunerations showed that the average was 71,00.00 per year. This si also skewed as there are several areas where a whole family wouldn't earn that much.

All this teaches us is that there a re lies damned lies and statistics.

Of course you have to be able to get a job in the first place to be paid, so good luck with that, especialy with all the foreigners that are being encouraged to come an live here. I'm a tradesman and only get $18 an hour in Welington city, I know of other tradesman who get as much as $20 an hour but that is still way below average wage. I'm not sure if they are talking it up to encourage imigrants to come here or just pulling numbers out of their arse.

My lawyer charges me $300 an hour and my accountant $350, so they would only need to work three hours a week to get the average pay. And seeing as they are never available when I try to ring them, I guess they probably do more than 3 per day... Just the 2 I know probably earn enough to outweigh the whole of Rotorua - and there are lots of them out there!

People, "average wage" does not mean "wage that the average person gets" - there's a big difference.

"median wage" is closer to what an "average person" earns.

2 factors are not considered in this equation. Tax and cost of living.

Simply put if a wage earner is earning $1000 per week that is before tax. The PAYE system averages around 30%. This is based on normal working hours. If that $1000 per week includes over time or benefits the tax threshold changes accordingly, usually increasing. As such take home pay which is what most wage or salary earners consider is invariably lower.

Second consideration is cost of living vs % of take home wage. Simple equation. A carton of cigarettes costs $100.On a wage or salary of $500 per week that represents 20% of the salary. In China where I live (on a rough exchange rate) the salary converts to RMB2500. A carton on cigarettes costs RMB 100. This represents 4% of the total salary. So in reality its not the wage or salary figure that matters but the percentage of what that wage or salary buys. As a teacher I earn just over NZ$1000 per month but that affords me a higher standard of living than living in NZ on NZ$1000 per week.

A basic idiom is 'Champagne tastes on beer money'. The politicians, big business tell us that the economy is growing and it is but only for the select few but the masses are still paying the price. Revolution or evolution.

What is the median wage for New Zealanders for 2010?

@Murray This wasn't a survey, this is from Statistics NZ. They get their numbers from the IRD. When the head of Telecom gets $7m one year, that adds about $4 to the average wage. The median wage makes more sense because it is closer to the average persons wages. Average wage is $52k but the Median wage is closer to $35k. At the 2008 election, 60% of wage earners made $30,000 or less.

Well, I have been doing my research as I am given an offer in Christchurch, and looking at these numbers for the median salaries made me wonder whether a family of 2 can actually be able to live on an annual salary range between NZ$ 18000 - 25000, and if such a salary regimen can actually cover up for rent and living expenses!

Any comments from you will be highly highly appreciated with gratitude...